Before I got sick with ALS, I really felt like I was finally in the groove. I work as an Administrative Secretary at a large public elementary school, a job I love! I got back into running a couple of years ago when I learned Chi running and could run without knee pain. I trained for and ran two half marathons and had another coming up in October. I started growing out my curly hair a few years ago and began to love it after hating it most of my life. I have a wonderful husband and a 15-year-old son who started life at less than two pounds as a micro preemie and is now a thriving teenager who is taller than me.

My symptoms came on suddenly. One night in December 2015 I was over at some friends’ house for dinner and when I talked after dinner, my mouth was extremely dry and I couldn’t move it to say words correctly. The biggest symptom seemed to be dry mouth, although my son and husband started to accuse me of mumbling. My family practice doctor ordered a blood test for Sjogren’s Syndrome, which can cause dry mouth. She also referred me to an ENT for the dry mouth. The Sjogren’s test came back negative. I got an appointment with the ENT but it was two months out.

I have ALS in my family. My mom, my aunt, and my cousin all died from ALS.  It was in the back of my mind that this could be ALS, but I didn’t think it would start in my mouth. My mom’s started in her arm. She died in 1994, and since that time I have avoided learning about ALS and had to say things like, “I am not my mom, I am not getting sick”, when she was sick. If I thought about it too much I would start to notice tingling in my feet and hands. And any little muscle twitch was scary.

The ENT appointment finally came. She looked in my throat with a scope and didn’t see anything, but saw something with my vocal chords that made her refer me to a neurologist. I walked out of that appointment very frustrated. I wanted her to find something, anything besides ALS.

My husband met someone whose brother had died of ALS and his started in his mouth. Oh man, I did not like hearing that.

The neurologist did more blood work, and ordered a brain MRI and chest x-ray and referred me to speech therapy. After more tests that showed nothing, my neurologist referred me to the UCSF ALS clinic “to rule out ALS.” At this point I realized my anxiety was out of control – I was noticing, or so stressed that I was manufacturing, tingles in my toes and hands. I went back to my doctor and got some anti-anxiety medication. That’s what helped me get through the month I had to wait until the UCSF appointment.

The day before we left for my dreaded appointment, we went to dinner with friends. My friend Catherine told me about the founder of her company who had ALS and couldn’t speak, but still participated in Board meetings and still skied. I said, “I wonder why it didn’t spread. Was it really ALS?” The only ALS I was familiar with progressed rather quickly from limb to limb.

At UCSF, my husband was able to stay with me while I waited and during the EMG, which was a huge comfort. I was able to feel most of the sensations during the EMG and I thought that was a good sign. The doctor came in and tested my reflexes and had me walk with toes up and on tip toes. She had me spread my fingers while she pushed against me. It seemed that I was doing everything fine. She tested my reflex in my chin (who knew there was a reflex there?) Then she said, “I’ll be right back. I am going to get a pamphlet.” We thought uh oh.

She came back and explained that I have ALS in the Bulbar region – the tongue and throat. I immediately started crying. She confirmed that there was no evidence of any nerve loss in my arms or legs. She told us about the newly discovered ALS gene that causes ALS and dementia. My mother’s father and brother both had dementia. She recommended that I do genetic testing because the people researching that gene would be very interested in me.

I did send my blood off to Northwestern, who unbeknownst to me had a year before confirmed my mom had the newly discovered gene. We are still waiting for the results, but I already know I have the gene. In the two and a half months since diagnosis, my speech is mostly unrecognizable, and I have a feeding tube for almost 100% of my nutrition. I had several scary aspirations, and it was taking me longer and longer to eat before I got my tube, plus I was losing weight.

I have three different methods of communicating – a Boogie Board that I can write on, erase, and write again. I have Speech Assistant on my phone and Proloquo4text on my iPad. I am still working and use all three methods to communicate at work.

I take Rilutek, a drug that is supposed to slow down the progress of ALS. I take Nuedexta, a drug that reduces inappropriate laughing and crying, which is surprisingly part of ALS. I never had inappropriate crying or laughing, but had experienced some exaggerated responses to appropriate things. The drug helps. I carry a pretty cloth napkin with me to help with drooling. I grind all my drugs and take them through my feeding tube.

I use a bipap breathing machine at night. This is used therapeutically, because it has been shown that using bipap for at least 4.5 hours a day can help the diaphragm relax and last longer. I also have a cough assist machine that I am supposed to use to do therapy 4 times a day, and a suction machine for things in my throat I can’t cough out myself.

These are some major life changes. I am now able to see that it may be a blessing to know your days are limited, because it gives you a chance to live life intentionally. I am focusing on love, connection, and hope. 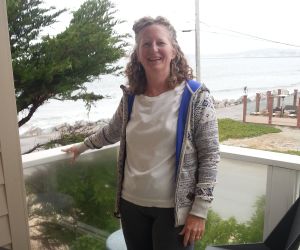