In the spring of 2012, I noticed my dominant hand was always shaking. By early summer I was struggling to secure lane lines for our kid’s swim team. In July, a good friend was trying to set up an intervention because my speech sounded alcohol laced. We received an official diagnosis in October. I was 40 years old. My progression was quick; I was in a wheelchair, with limited movement, a year later.

I will never say getting ALS was a good thing, but I refuse to get lost in anger. I vowed to fight my battle with ALS with complete transparency and have done so on my Team Hayden Facebook page. The support I have received is amazing and I hope I am creating some awareness about this ugly disease. I am living with the hope that a cure will be found so my children don’t have to grow up without me. 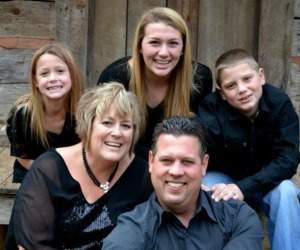