I was born big and have always been a large, strong man. That is, at least, until the spring of 2011. It was on a walk to the store with two of my daughters and my three month old granddaughter that I had my first glimpse of trouble to come. I tripped, for no apparent reason, tumbling hard to the sidewalk, nearly taking the baby’s stroller with me. I was 56 years old and could still lift trees and boat motors, climb hillsides while hunting, clamber up and down cliff faces to get to the best fishing spots on the rivers near my home in BC.

It happened a couple more times that spring. My son commented that “my Dad isn’t supposed to just fall down like that.” I wasn’t sure what was happening. I have had trouble with my left knee for years and I thought this might just be its last gasp. I had ultimate faith in my body’s ability to compensate, to repair itself. After all, it had never let me down.

That summer I went on my usual summer sailing excursion, solo on my boat up the coast of BC. On my way back I was having some trouble with the outboard on my sailboat. As usual I went to pick it up; it weighs somewhere between 80 and 100 pounds, no big deal for me normally. But I fell, my left leg giving out from under me, and as I fell the motor landed on top of me. My back was injured, although nowhere near as badly as I assumed. I went to bed and it took me a couple of days to recover, yet recover I did as I always have.

As the year wore on, I noticed an ever increasing weakness in my legs. 2011 turned into 2012, and weakness continued. I blamed this on my back injury, until my doctor finally sat me down and said this was not a back injury. With tears in my eyes, I asked him “Then why am I losing my ability to walk?” His response was that I needed to see a neurologist.

I finally managed to see a neurologist on November 20, 2012; in fact I saw a whole team of them. It took them two days, with me in hospital all the time, to finally say those three dreaded letters to me – ALS. I was 57 years and three months old. My life has changed incredibly since then. I have lost the use of my legs, my arms are weakening, I am stuck in a wheelchair. I have had to leave a well-paid career and now live on my savings and a meager disability pension.

Yet I do not despair. I am happy, living as full a life as I can. While ALS can take my body, it cannot steal my mind. My attitude, my approach to life and living, is mine to keep forever. I am living with ALS, not dying from it. If you want to know more about my journey, you can read about it at http://richardislivingwithALS.blogspot.com. 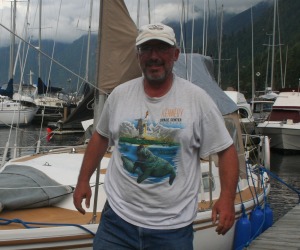