After two fulfilling decades of teaching English, ESL, and Japanese, I decided in 2010 to attend law school. Frustrated by education policy, I wanted to model the courage, civic engagement, and pursuit of change that I had long prescribed to my students as essential to a meaningful life. (Apparently, if you teach the Transcendentalists and show Dead Poets Society enough times, then hope, passion, and determination to pursue your highest ideals just take root.) I moved my family to Chapel Hill, graduated in May of 2013 and became a member of the North Carolina Bar that October.

But I had a bad feeling about the leg weakness that doctors could not explain. Fortunately, I passed on a clerkship in order to teach another year and be with my freshman son while I pursued answers. I also got vested in the NC retirement system, and it’s a good thing, since I am not going to have that second career in law and policy!

ALS will rob me of that future, but before it does, “I will sing my song until my voice is gone.” (lyrics by Old Ceremony)

I have been able to advocate for strong public education as an advisory board member of Public Schools First NC and to take disadvantaged students on a donor-funded trip to Washington, D.C. called Writing Wrongs. I will follow this up in February with a benefit for Public Justice, one of the nation’s leading public interest law firms, which advocates and litigates for environmental and consumer protections and for civil, employee, and patient rights. I also plan to attend ALS advocacy day in D.C. this spring. While ALS will take my life, I forbid it to take my voice.

With generous support of family and friends, I use ALS to advance the ideals in which I believe. I have also taken my two teenagers (Hagan, age 15, and Hadley, age 13) to Japan, swum with manatees, and returned to my musical roots, seeing The Pixies, The Old 97’s, New Pornographers, and Dream Syndicate. Next month’s benefit for Public Justice, JUSTmusic, features a screening of REMTV – the music that inspired me in college to pursue an unconventional life – to aspire to courage, service, and social progress.

I wish I could stay, but I am not afraid to go. And I am grateful for the opportunity to live these final years intentionally, with purpose and passion.

You can read my story in (woefully intermittent) posts at vivcon.wordpress.com. 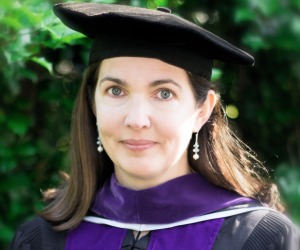