Who wants to talk about #whatwouldyougive?

Trick question! This is my blog, and we’re going to talk about whatever I want to talk about. And this particular post is long overdue. Part of the reason I haven’t been talking about the campaign is because there is almost too much to say. August was a huge success for us, and our incredible team members brought in 170K, a number I can barely believe. As many of you know, our goal is to raise 250K for research at the ALS Therapy Development Institute in Cambridge, Massachusetts. These brilliant folks have a  promising drug that can go to trial in 2018—but not without help.

What you may not know is that our campaign isn’t over yet. We launched the second wave of #whatwouldyougive this month, and it’s a big one. We are partnering with hundreds of social influencers (Bloggers, Tweeters, Instagrammers, and more) to raise further awareness about ALS and our efforts to find and fund treatments and a cure.

How does this work? The San Francisco-based influencer marketing company Linqia is doing a pro bono campaign on behalf of Speed4Sarah and #whatwouldyougive. Linqia’s partners are masters at messaging; they have hundreds of thousands of followers and are posting about my story, as well as their own encounters with this disease. It’s enormously powerful to have access to this kind of reach, and I cannot thank Linqia and their content partners enough. This is utter selflessness; these influencers are getting nothing in return for helping us spread our message that ALS is NOT INCURABLE. It is underfunded. And that’s a problem we can fix.

As an added bonus, Jay Smith and the incredible people at Every90Minutes will be matching up to 25K in donations.

I love seeing posts where people are asking their followers to simply donate $1 or maybe $5, a number that would make an enormous impact in the world of ALS research. It won’t take much if we have many. My question is how many people can we involve? Scarlett’s question is whether this will make her famous. I told her she is already very famous in our neighborhood for being the loudest child in a five block radius. She seemed satisfied with that.

The level of support that we’ve received since we launched the campaign in June is mind blowing. Yet again, so many people inconvenienced themselves and their families (and their baristas) by taking our challenge and giving up an ability. It’s hard to walk in someone else’s shoes or to roll in their wheelchair, and I am grateful and humbled by the number of people who chose to do that. I wish I could talk about each one of them individually, but I’m very exhausted from teaching my dictation software how to spell Linqia.

Right now I’m sitting inside my house, with Otto curled up in his typical spot next to my wheelchair. The air outside is considered unhealthy as a result of the massive wildfires to the north of us. It’s heartbreaking to think about how much has been lost. But it’s also inspiring to see how many people have stepped up to help those in need. My family has donated to aid groups working to help hurricane victims, and we have donated to help those who are suffering in the wine country. There are so many good and important causes, and it’s critical to remain engaged, to be a helper in whatever way we can.

Follow this link to see the progress of the Linqia team and their powerhouse influencers. 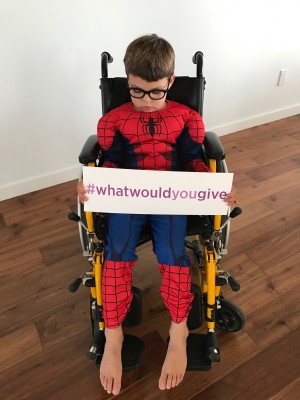 3 thoughts on “When the Giving Gets Good”

I was diagnosed with ALS in 2012, after a year of random falls and unexplained muscle weakness. Though I used to be a runner, I'm now in a wheelchair. I can still find the good and the funny in every day, mainly thanks to my hilarious, sweet and massively feisty 8-year-old.

Back to All Posts