Tomorrow is the first day of August, and the first day of the 2017 #whatwouldyougive campaign. I can’t believe that this week has arrived. First of all, when I initially conceived of the idea for this campaign, I thought it would only be a one-time deal. It’s beyond inspiring to see how many people joined, whether to take the challenge of giving up an ability, to donate generously, or to hold our signs and stand in solidarity with the many of us who can no longer stand on our own.

By far, my favorite part of the campaign week is the reactions from those who are giving something up in an effort to understand just a little bit of what it might feel like to live with ALS. Right away in year one, I realized that people were getting it. They were understanding the frustration, the loneliness, the helplessness. They were grasping the concept that life with a sudden disability is not only shocking, but incredibly inconvenient. They were grateful, some tearfully so, when they could use their entire, strong bodies once again. And I loved them for it. I love them for doing it again or for doing it for the first time. I love them for making this matter, because no one can do it alone.

We got an email from Poland last week. An association there wants to adapt #whatwouldyougive to raise awareness and funds for people fighting ALS in their country. This news was amazing to me, and not just because my Polish grandfather would have gotten a kick out of it. The campaign is spreading. Awareness is spreading. And with that, hope is spreading. This campaign is not about me, and it’s not about my family (even though we talk about it all the time.) To me, it’s entirely about the people who are being diagnosed today, who will be diagnosed next month or next year. I am fiercely committed to a not-so-distant future where a person gets an ALS diagnosis and then they get the good news. There is treatment. There is a plan.

And so it begins. Tomorrow, my husband Rob will give up his ability to feed himself. Scarlett was not super psyched when she heard about this, because she quickly figured out that if he can’t feed himself and I can’t feed him, then it’s either her or the dog. And Otto can’t help, because he is in timeout for the rest of his life for driving me crazy today. So our seven-year-old will be taking on some additional responsibility before camp tomorrow. I hope she is prepared for how much coffee her father requires in the morning.

This is life with ALS. Disruptive. Complicated. And slightly comical. I certainly plan to laugh at them tomorrow. I’m taking bets on whether or not Rob will end up covered in food. Not because Scarlett will be sloppy, but because she’ll probably throw it on him at some point. Needing help is hard, but being a helper is hard, too.

I’m sitting in the dining room right now. My dictation software is having trouble understanding me over the noises of Otto whining, Scarlett and her friend running in and out of every room, and the waterfall from our new (temporary) turtle tank that has taken up a considerable amount of space in the kitchen. But I’m happy. At this moment, we have raised 64K for ALS research, and that doesn’t include some very generous corporate matches.

I want to thank all of our team members who are taking the challenge and raising money to help end this disease. Good luck this week, I will be watching and cheering you on. And speaking of that, Scarlett and her friend Palmer just marched into the house, chanting “ALS! ALS!” and holding homemade signs.

“Did you ask them to do that?” my caregiver asks me.

The answer is no. “Scarlett rarely does what I ask her to do,” I tell him.

And that means an extra Good Luck to Rob tomorrow.

Please consider a donation to #whatwouldyougive. It is deeply appreciated! 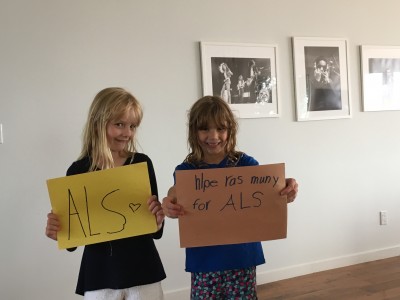 I was diagnosed with ALS in 2012, after a year of random falls and unexplained muscle weakness. Though I used to be a runner, I'm now in a wheelchair. I can still find the good and the funny in every day, mainly thanks to my hilarious, sweet and massively feisty 8-year-old.

Back to All Posts